SINGAPORE – A labyrinth of rooms lie behind tinted doors, obscuring the view of the world within from the public. But the lingering smell of cigarette smoke, coupled with bursts of loud music escaping each time the doors open, gives it away.

These KTV lounges, which have pivoted to operate as food and beverage establishments, remain popular with men aged between 20 and 50.

Despite the growing cluster uncovered this week, many of them have continued to flock to KTV lounges located in strata malls and mixed-used developments.

Checks by The Straits Times found that some patrons had planned a “last hurrah” on Wednesday evening (July 14), after finding out that their favourite haunts were to be closed for deep cleaning.

The Ministry of Health (MOH) announced later that night that four KTV lounges were to be closed, as there was suspected ongoing transmission on the premises.

Many of these lounges are known to have been operating without safe distancing, those familiar with the KTV lounge scene told ST.

A KTV lounge about the size of a basketball court has been known to house as many as 100 patrons inside, they said. One of that size would have 10 to 20 rooms within the premises.

While the usual check-in set-ups are placed at the entrance, patrons allegedly avoid using them, fearing they would be tracked.

Instead, patrons are greeted by hostesses sans mask upon entry, and, in turn, take off their own.

They are then ushered into one of the rooms, where they choose and are serviced by hostesses. Groping and fondling are purportedly more common than not.

After about half an hour, the hostesses would then excuse themselves, heading to another room to service other patrons.

This is known colloquially as “butterfly”, and involves a hostess splitting her time among multiple patrons, who each pay about $100 for her services at the end of the night.

Jerry (not his real name), a man in his 20s who is familiar with the KTV lounge scene here, said the hostesses flit between four and 10 patrons per night.

“Usually they only ‘butterfly’ at one KTV lounge a night, but it also depends on the pass they hold,” he said.

ST found that there are two distinct groups of hostesses.

The first group consists of short-term visitors, who usually stay together in groups in an apartment provided for them by a boss.

These hostesses can work only at the KTV lounges affiliated with their bosses, but tend to stick to just one each night.

The second group comprises long-term pass holders or residents, many purportedly with families here. These hostesses may “butterfly” to up to three KTV lounges in a night.

But the hostesses are not the only ones known to mingle in different lounges in a single night.

Jerry explained that many patrons also visit multiple KTV lounges in a night.

“If friends call saying they are at another KTV lounge, then they will head over there later,” he said.

“Different lounges also have different activities, like gambling at some, for instance.”

Some patrons also chase after their favourite hostesses, who may be at different lounges for the night.

The effect of such practices has become apparent in recent days, with new cases of local transmission going from just one on Sunday to 54 on Wednesday.

Thursday’s 34 new cases took the total number linked to the KTV cluster to 88. Experts said they expect the cluster to grow further.

Tom (not his real name), a frequent patron of such KTV lounges, told ST that many regulars and hostesses are not worried about the emerging cluster.

“They do not care,” he said. “Many are still operating secretly, offering customers sexual services.”

Describing what happens behind closed doors, he said that he expects the cluster to grow.

“Throughout the time in the room, hostesses don’t have their masks on, and they kiss, hug and even straddle the customers,” he said. “The virus is bound to spread fast due to the exchange of saliva.”

Tom claims there are about 600 hostesses here, and that a majority of them are not vaccinated.

He also said many of the KTV lounge operators have not been caught because by the time the police enter the premises, the hostesses would be long gone.

When there is word of an impending raid, KTV lounge staff allegedly get everyone out the back.

Tom said that while the authorities are now actively clamping down on safety breaches, he fears they may be unable to stop the virus from spreading through secret rendezvous.

“With many of the popular lounges now forced to close because of the cluster, many of these hostesses are now operating underground,” he said.

“This is going to make it even harder to nab them and the virus will definitely spread and get worse.”

KTV cluster will grow, with Covid-19 cases going under the radar: Experts Dine in for 5 resumes, S’poreans welcome chance to eat with friends, family at same table 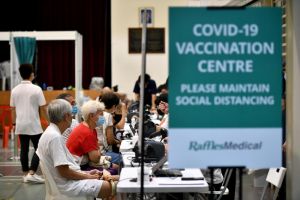 ‘I’m old and dying, so what’s the point of getting vaccinated?’: Seniors yet to get the Covid-19 jab Moving from Covid-19 pandemic to endemic: Singapore’s strategy and how it can unfold