LONDON – Rory McIlroy believes it is still possible for men’s professional golf to become “cohesive again” after an “ugly year” beset by bitter rows between the established US and European tours and the insurgent LIV Series. The Saudi-backed LIV has caused turmoil since its June debut, with record purses and financial guarantees luring several... » read more SYDNEY – Two Mali players apologised on Tuesday after they fought each other at the Women’s Basketball World Cup, with governing body Fiba opening an investigation into the incident. The scuffle erupted in a media zone at the tournament in Sydney on Monday and was caught on camera while Serbia’s Sasa Cado was being interviewed.... » read more LONDON – Tyson Fury says his proposed heavyweight showdown with Anthony Joshua is off after a deadline set by Fury’s camp expired without a deal on Monday. Fury set Joshua an ultimatum on Friday night, insisting if the deal could not be done in time then he would walk away from the blockbuster all-British bout.... » read more COPENHAGEN – Nations League holders France lost 2-0 to Denmark in their final Group 1 game but salvaged their place in the top tier at the end of a dismal campaign on Sunday. Didier Deschamps’ side, who will face Denmark in Group D at the World Cup in November, finished third in the Nations League... » read more SYDNEY – Dutch cyclist Mathieu van der Poel was arrested in Sydney and charged with assault after an altercation with two teenagers on the eve of the world championship road race on Saturday night. The Tour de France stage winner, who was one of the favourites to win Sunday’s race in the coastal New South... » read more AUCKLAND – Australia coach Graham Arnold sought to temper growing expectations around teenage striker Garang Kuol after the 18-year-old shone from the bench in his Socceroos debut during a 2-0 win against New Zealand on Sunday. The Central Coast Mariners striker, who celebrated his birthday this month, featured for the final 17 minutes of the... » read more MILAN – Giacomo Raspadori fired Italy to a 1-0 win over England on Friday which kept alive their hopes of making the Nations League final four. Napoli striker Raspadori decided an otherwise uninspiring encounter with a superb second half strike at the San Siro to keep the European champions two points behind League A, Group... » read more Football: Monza shock Juventus 1-0 to clinch first Serie A win of the season

Newly promoted Monza took a surprising but deserved 1-0 home win over Juventus on Sunday, their first Serie A victory of the season, as the visitors struggled after being reduced to 10 men. Juventus’ key player Angel di Maria’s return from injury was cut short when he was sent off five minutes before the break... » read more 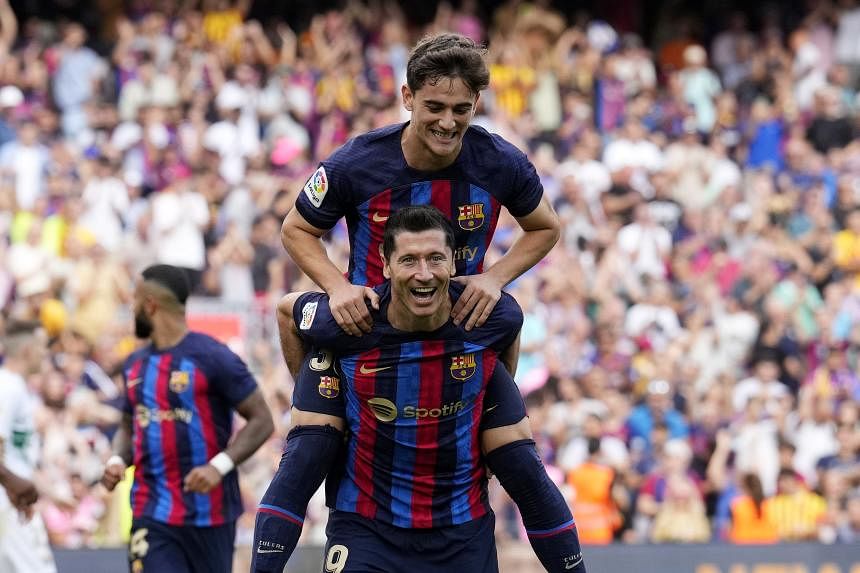 BARCELONA – Relentless striker Robert Lewandowski pounced twice as Barcelona hammered 10-man Elche 3-0 to move a point clear at the top of La Liga on Saturday. The Polish forward continued his sensational form since joining from Bayern Munich this summer, with a brace taking him to 11 goals in eight appearances across all competitions.... » read more LONDON – Son Heung-min said he never doubted he would end his goal drought as the South Korea star responded to being dropped by hitting an incredible 13-minute hat-trick in Tottenham’s 6-2 rout of Leicester on Saturday. Son came off the bench to score Tottenham’s last three goals, including a pair of brilliant long-range finishes, in... » read more THESSALONIKI, Greece – Former West Ham, Newcastle and Crystal Palace coach Alan Pardew has signed a one-year contract with Aris Thessaloniki, the Greek Super League club announced on Wednesday. No financial details of the contract were revealed by the team but there is an option for an additional season, if both sides agree. “I am... » read more MADRID – Late strikes from Fede Valverde and Marco Asensio’s allowed Real Madrid to maintain their 100 per cent start to the Champions League campaign with a 2-0 win over RB Leipzig. It threatened to be a frustrating night for the record 14-time winners and reigning champions until Valverde finally provided the breakthrough, continuing his... » read more Football: Liverpool’s Van Dijk vows to do ‘much better’ after dip in form

LONDON – Virgil van Dijk has vowed to do “much better” as the Liverpool defender fights to arrest his alarming loss of form this season. By his own high standards, Van Dijk has struggled in the first eight games of the new campaign and the Netherlands centre-back isn’t shying away from his woes. Van Dijk... » read more LONDON (AFP) – Alex Albon has been released from hospital after the Williams driver suffered respiratory failure following complications from appendix surgery. Albon missed the Italian Grand Prix in Monza with appendicitis on Saturday (Sept 10) and was transferred to nearby San Gerardo Hospital for treatment. The 26-year-old underwent surgery, but then ended up in... » read more Tennis: Former world No. 1 Halep to rest after nose op

BUCHAREST (AFP) – Former world number one Simona Halep said Monday (Sept 12) she would need a few weeks of rest after undergoing nose surgery. The Romanian, who currently ranks ninth in the world, said she had been struggling “for a while” with nose problems, and they got worse during the summer, making it hard... » read more SINGAPORE – It was double delight for the Singapore Golf Association on Saturday as two of its amateur golfers won respective collegiate events in the United States. Within hours of Shayne Lim’s success at The Players Club Invitational at Yorktown, Indiana, Hiroshi Tai triumphed after a play-off at the Maui Jim Invitational at the Outlaw... » read more LONDON (AFP) – Manchester United led English football’s tributes to Queen Elizabeth II before their 1-0 defeat against Real Sociedad in the Europa League, while Roma boss Jose Mourinho was in mourning after the monarch’s death on Thursday. United, West Ham and Arsenal players – the Premier League teams in action in Europe’s second and... » read more NEW DELHI – Cricket great Sachin Tendulkar called on Indians to keep sport “free from personal attacks” after a Sikh player from the national team suffered a torrent of online abuse for dropping a catch in a match against Pakistan. Most of the vitriol directed against Arshdeep Singh, after he dropped an easy catch at... » read more (REUTERS) – Jose Mourinho was handed his worst defeat at the helm of a Serie A team in his career, after AS Roma were thrashed 4-0 by Udinese, who showed no mercy on Sunday (Sept 4). Roma could have gone top with a win but Udinese scored after five minutes through Destiny Udogie, who intercepted... » read more